This edition of Fossil Free News was originally published as an email on December 17. Sign up here to receive it directly every 2 weeks.

The 24th UN Climate Talks (COP24) took place from 2 to 14 December in Katowice, Poland – a country where 80% of electricity, and half of primary energy, is from coal. The talks predictably failed to deliver a functional rulebook for the Paris agreement to keep warming under 1.5˚C. But, there were plenty of signs of real leadership to fill the gap. On Thursdaym in Katowice, a press conference celebrated 1,000 people-powered divestment commitments and highlighted some of our major wins to date – spanning 37 countries since 2012: cities like New York, Berlin and Cape Town; medical institutions like the American Public Health Association; faith groups like the Diocese of Assisi; insurance giants and investment funds like Norway‘s sovereign wealth fund and the country of Ireland. Big and small, they’re all important.

Watch and share the video to help us celebrate and read the full 1000+ divestment commitments report. 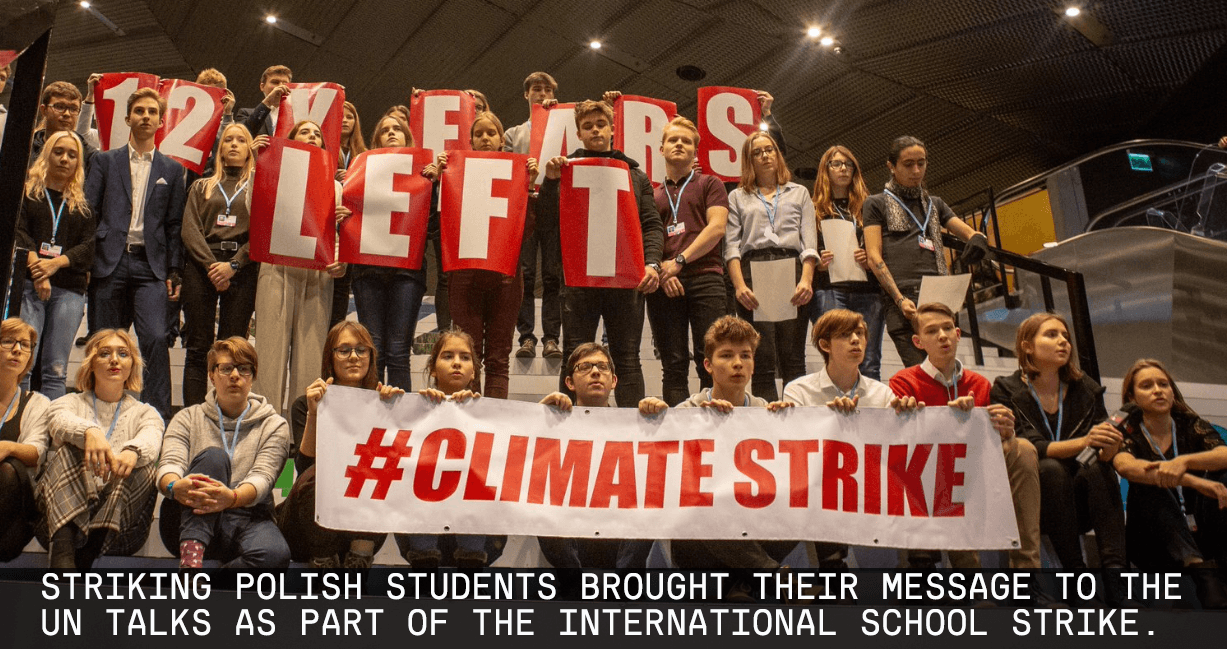 Answering Greta Thunberg’s call for school strikes, youth in Poland, Switzerland, Germany, Sweden, and Australia skipped school for the climate. And the #climatestrike continues to spread. Here is a really wonderful toolkit on how you can take part – as a parent, young person, educator, or all of the above.

And back in the United States, over 1,000 young people flooded the halls of Congress to demand action on a Green New Deal before the end of the year, resulting in over 100 arrests. Sunrise Movement has been steadily pushing new representatives to go on the record. The call for a Green New Deal has spread to Canada.

Meanwhile, in South Africa, people gathered outside the Westin Hotel in Cape Town during the country’s Energy Week to oppose the Development Bank of Southern Africa (DBSA) plans to fund Thabametsi coal plant.

This actions coincided with a push to showcase 8 inspiring campaigns of people power against carbon bombs all over the world. Three of the 8 projects spotlighted during the COP are in countries where very little energy comes from coal: Sendou in Senegal, Rampal in Bangladesh, and Lamu in Kenya. You can learn about them all here and get what you need to help spread the word. 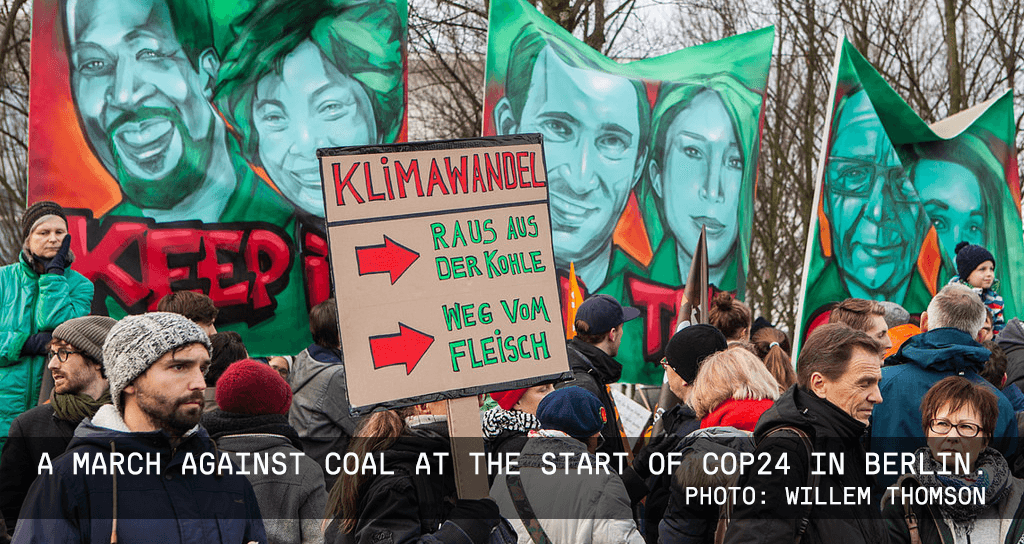 Even before the  COP24 talks officially began, people were setting the tone. A day before the start, 75,000 marched in Brussels, Belgium and 35,000 came out in Germany, split between Berlin and Cologne. That momentum came through again on December 8, with a peaceful march in Katowice and actions to sound the climate alarm around France and Europe. But it wasn’t easy. Some 15 activists were turned away at the border in Poland. This intimidation of civil society is unacceptable – coal companies can’t be let in, while climate defenders were kept out. You can sign the call to Poland to stop intimidating civil society.

What’s more, international coverage on fuel-tax protests in France has tried to create a false dichotomy of climate versus the people. A just transition to go Fossil Free means shifting the costs off ordinary people and to polluters from the fossil fuel industry.

As usual, we’ve got more #FossilFree wins to report this week:

So much inspiring activism around COP24 has come from the growing climate movement in Eastern Europe, the Caucasus, and Central Asia. Meet the young people from across the region making it all happen, and watch this inspiring 6-minute film about the grassroots revival currently underway in Poland. 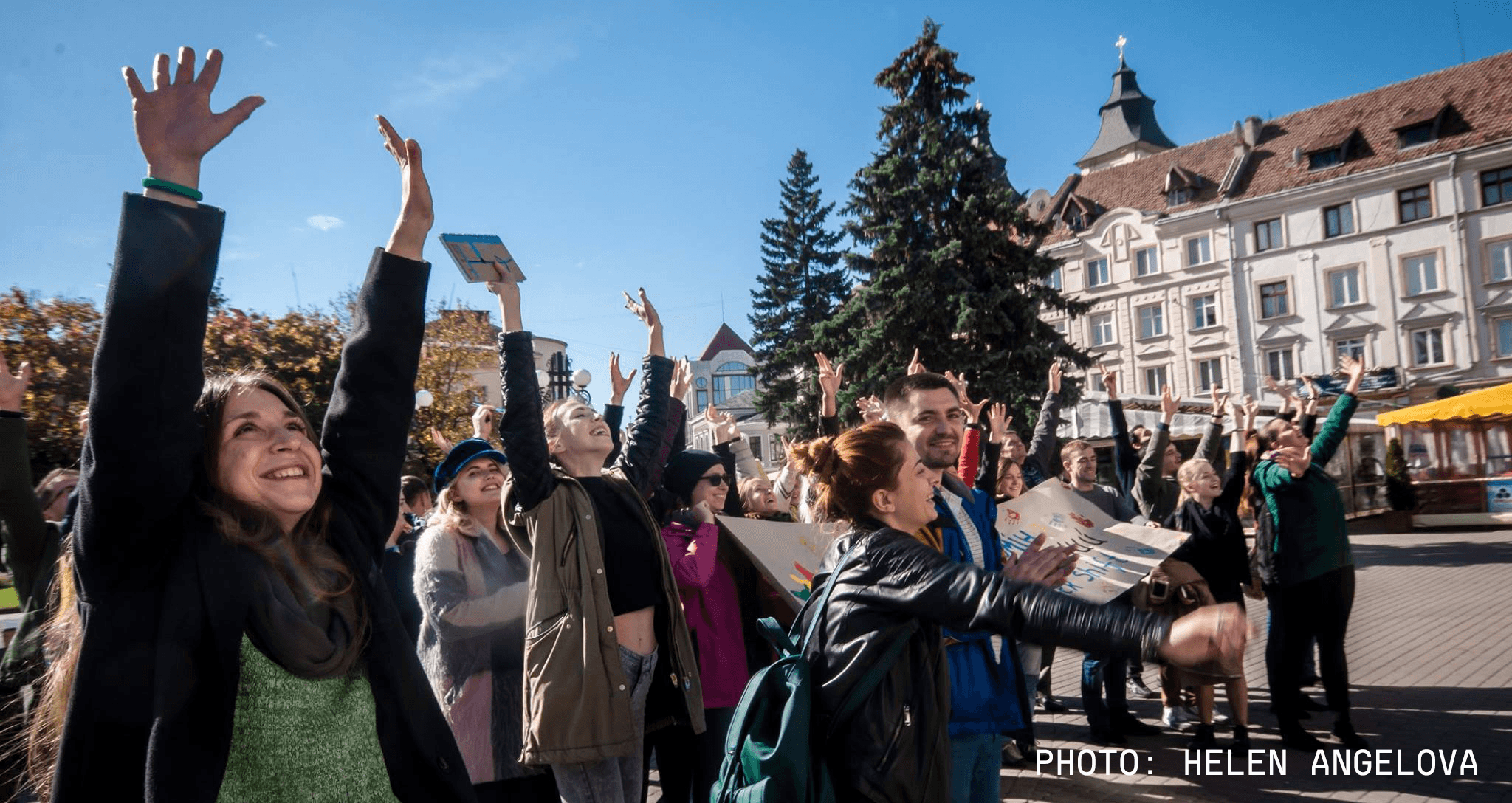 It’s total madness, but countries are still building fossil fuel projects around the world. COP has shown us that people power is the only thing that’ll stop these carbon bombs from going ahead and pushing us to climate breakdown. Watch the 2-minute video “People Power versus Carbon Bombs” and learn about some of the projects being contested right now. 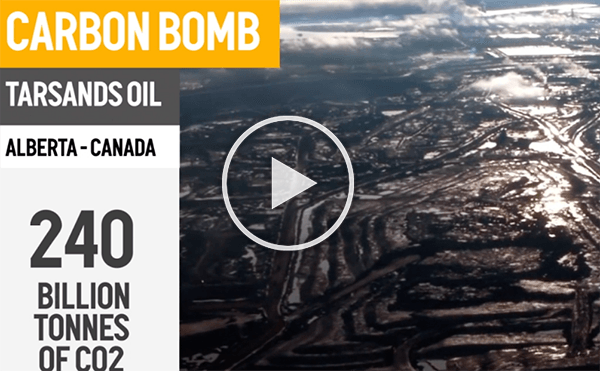 You can check out reporting from on-the-ground at the COP in Poland via this edition of Democracy Now. There are some great features, and a special look at how Costa Rica has gone Fossil Free. Officials from the country announced they’d be up for hosting next year’s talks, after Brazil’s new President Bolsonaro suddenly announced they were out. But in the end, COP 25 went to Chile.

That’s all for now. We’ll be back in two weeks with another update. And with the end of the year approaching, please consider making a donation, if you can, to help build a Fossil Free world: