Five years after climate change fueled Superstorm Sandy devastated New York, five thousand people rallied in New York, coming together with art, music, and the power of everyday people to remember lives lost and neighborhoods flooded. Led by a frontline of young people of color and Sandy survivors, we marched over the iconic Brooklyn Bridge to the Alfred E. Smith houses, a community housing development severely damaged by the storm.

We rose to demand bold, effective climate action from New York’s elected officials. Over 150 organizations representing faith and youth groups, unions, community organizations and many more, came together with common demands for climate leadership  from New York’s Mayor de Blasio, Governor Cuomo and Senator Schumer. As one of the financial centres of the world and a bellwether for progressive action, we need New York, more than ever, to set a higher bar.

We demanded that New York stop investing billions of public pensions fund dollars in the oil, gas and coal companies that are causing storms like Sandy, Maria and Irma. We called for 100% renewable energy and more efficient buildings across the state and regulations to force dirty industries to pay for the climate pollution they emit. And we called for elected officials to do right by Sandy survivors and expedite getting them back in their homes.

“The world watches in hope that New York will take the steps to help head off the next storm. In the financial capital of the planet, divesting pensions from fossil fuels would be a signal to everyone else that real change is really coming.” 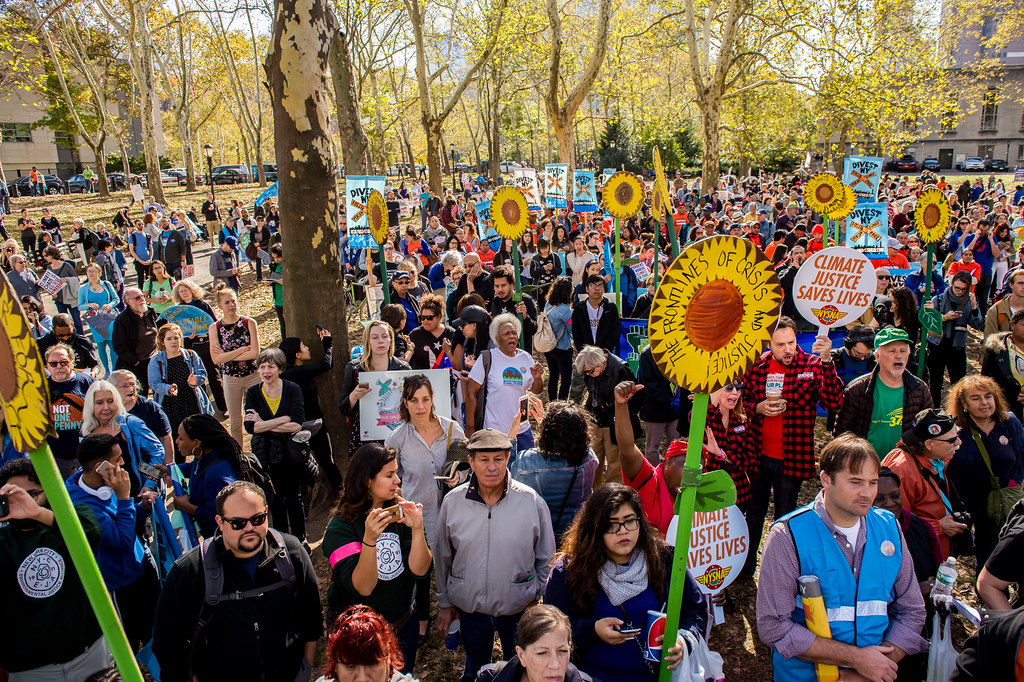 Rachel Rivera, a Sandy survivor and member of New York Communities for Change explained it perfectly when at the front of the rally she said: .”Our family lost our home in Sandy. Five years later, my daughter still has nightmares and gets scared when it rains. All these storms are climate change, brought to us by the likes of Exxon and Trump, who are now taking the federal government backwards. Mayor de Blasio and Governor Cuomo have the power to create many good new jobs for people who need it badly by moving us now to actually solve the climate crisis. It’s time for them to pass and implement bold solutions, That’s why I’m marching.”

Taking our message to the Brooklyn Bridge – @NYCMayor @NYCComptroller your city is telling you to #divestNY from fossil fuels #Sandy5 pic.twitter.com/WQnUrInsZh

Youth of color leading the #Sandy5 March as the crowd heads to the Brooklyn Bridge. We want climate justice now. #WeRise pic.twitter.com/8asgMAzVNF

Our hearts are more energized than ever before (even if our feet are a little tired!). Our movement is strong and beautiful, and has the momentum to transform New York. Take some time to share these photos today, and get ready for tomorrow – even though today’s march is over, the transformative work is just beginning. We will keep rising together and fighting for climate action.

Help amplify the impact of the Sandy5 march: