After Rise for Climate — join hundreds of thousands of people around the world to take part in simple but powerful local actions for a Fossil Free world.

City by city, town by town, let’s keep the pressure up.

In early October, we’ll take action together to bring home the urgency of keeping global warming below 1.5C.  Keeping our planet safe for billions of people means leaving fossil fuels in the ground.

Sign up below to receive a pack with everything you’ll need after 8th September to grow the local climate movement where you live and join the calls for urgent action.

Together, we can keep the pressure on local leaders to make real, actionable climate commitments that are in line with what justice and the science demands.

I’m ready to add an event to the map

I’m ready to register a campaign

What next after Rise for Climate?

What comes after Rise for Climate

Tens of thousands of new people are set to join inspiring events on 8 September. That's lots of new people who will be excited to take local climate action together in the aftermath of Rise for Climate — so what can you do to absorb all the momentum and new people power into your local movement or group?

Make it easy for people to stay involved

Take some time before and after 8 September to plan at least one follow-up event that you can invite people to straight after Rise for Climate. Being quick to send out report back emails and photos/videos on your social media channels will help capture people's attention while there's still a buzz after Rise.

One month later, starting 8th October, we'll be inviting you and all these new people to take part in a simple, local action again.

Thank you for signing up.  Keep an eye on your inbox where you'll receive an email containing links to everything you need to build up a new or existing local campaign in your area.

Have you checked the Fossil Free map yet to see if there's already an active campaign near you?   If there's not and you're ready to register your group on the map, visit our Get Involved page

You can also find your national or regional Fossil Free contact here. I just got my Fossil Free starter pack

City by city, a people-powered movement is pushing local leaders to commit to building a Fossil Free world. I just ordered my own Fossil Free starter pack and you can get your own here

Inspiring films you can screen locally

An event kit with sample agendas for any kind of event

The latest Fossil Free News to your inbox every 2 weeks

You're signed up to learn more about hosting a Fossil Free gathering!

Check your email for a message with more information and next steps.

There are thousands of campaigns, local groups and upcoming events all over the world. Find one where you live and get involved:
Register an event here to add it to the map 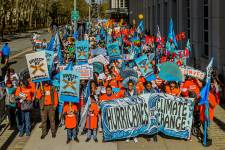 Today, the New York State pension fund, valued at over $226 billion (USD) and its sole trustee, the New York… What the future holds for us and our communities beyond COVID is deeply personal. We’re at a crossroads now — governments… Whether in major cities or small towns, Black, white or non-Black people of colour communities have marched, held vigils, and…