We just got the news that the First Unitarian Church of Salt Lake City has become the first Unitarian congregation in the country to commit to fossil fuel divestment! Rev. Tom Goldsmith told the Salt Lake City Tribune yesterday, “We did the math,” he said, “and we realized that the difference between green investments and fossil fuels is miniscule.”

First Unitarian members met over the weekend to explore the question: “What would Jesus divest?” They then voted unanimously to make sure their $700,000 endowment was free of fossil fuel stocks. 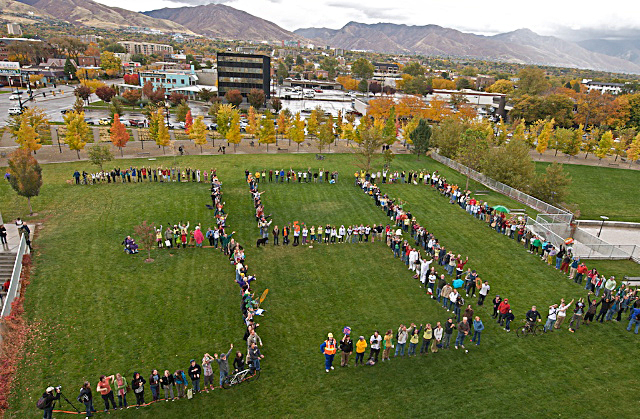 As Bill McKibben has said in the past, it makes no sense for religious institutions to be investing in companies that are, in effect, “running Genesis backwards.” In their proposal to divest, the “socially conscious” First Unitarian Church wrote, “Since our congregation fits that description and most members and friends are acutely aware of climate change and the environmental destruction caused by the burning of fossil fuels, it represents an opportunity to do our part in an effort to preserve a livable planet for ourselves, our children and grandchildren.”

Salt Lake City has a long and proud history of climate activism. It was the home of one of 350.org’s first big climate rallies, back when we were the Step It Up 2007 campaign. It’s also the home of one of our favorite allies, Peaceful Uprising, and climate justice activist Tim DeChristopher, who recently got released from 18 months in prison after disrupting an oil auction in Utah (to learn more about Tim’s story, check out the new Bidder 70 film that is in theaters now).

The congregation at First Unitarian know that their action alone won’t solve climate change, but that their leadership can inspire more congregations, universities, cities, and other public institutions to also divest. As Joan Gregory, who leads the congregation’s environmental ministry, told the Tribune, “It is one piece of the puzzle. It is a way to walk our talk.”