Berlin’s parliament has just voted to divest from oil, coal and gas companies.  Today Berlin joins other European capitals like Stockholm, Paris, Copenhagen and Oslo in making a powerful, public rejection of the fossil fuel industry.

The Berlin House of Representatives decided to blacklist investments in companies that are incompatible with the German capital’s goal of becoming climate neutral by 2050. The new investment policy will ban coal, oil and gas companies from the city’s €750 million pension fund, which includes shares in companies such as RWE, E.ON and Total.

Christoph Meyer who has been campaigning with Fossil Free Berlin for the German capital to cut its financial ties to the fossil fuel industry said:

“Berlin’s decision to blacklist fossil fuel companies is the latest victory for the divestment movement, which serves to remove the social licence from companies whose business model pushes us into climate catastrophe. We will keep a close eye on the administration to make sure it upholds today’s commitment and urge the city to now take quick steps to break its reliance on coal power.”

This historic win comes after a tenacious two year campaign by the Fossil Free Berlin crew who refused to accept their city continuing to profit from companies who wreck the climate. 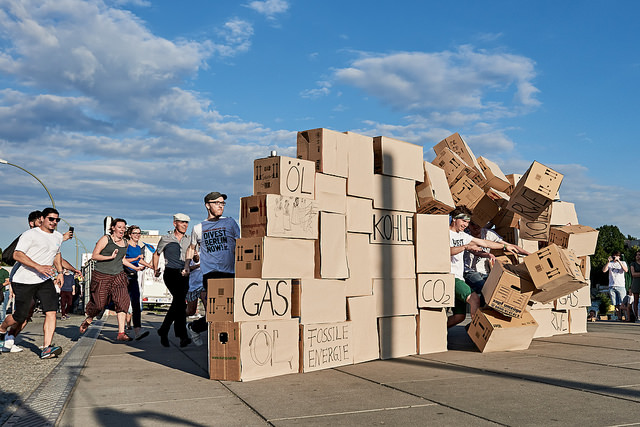 After months of delays and frustrations, Berlin decision-makers finally voted this afternoon to go Fossil Free. The city’s financial administration is now looking for experts to help them exclude companies that extract or generate energy from fossil fuels or nuclear, along with weapons companies. They expect to be able to start divesting  by January 2017 and the Berlin campaigners will be keeping a close eye on their next moves.

Today’s decision shows that perseverance pays off. Fossil Free Berlin used exemplary creative tactics – from tearing down the ‘wall of fossil fuels’, to projections onto the city hall building to huge marches through central Berlin to divestment-flashmobs inside city council meetings.

This victory strengthens our entire divestment movement – and adds pressure to other cities, pension funds, faith groups, universities and other large investors around the world to follow Berlin’s example.