On September 27, the Brazilian National Oil and Gas Agency (ANP) will hold in Rio de Janeiro the 14th Big Round of Oil and Gas Auction. They will offer 287 blocks up for sale – in various regions of the country, offshore and onshore – thus putting biodiversity and populations at risk in a total area of ​​more than 120,000 km².

Of the 36 companies that were approved by ANP to participate in the auction, more than 60% are foreign and at least five of them are involved in corruption cases. While continuing to prioritize fossil fuels projects instead of starting the transition to a renewable energy economy, the Brazilian government is doing a disservice to the populations around the globe and is going in the opposite direction of the rising global climate movement that we are part of.

We will show the Brazilian government that we want a renewable, responsible and ethical future for Brazil. And not one led by the fossil fuel industry.

We invite people around the world to take part in this action:

We want to bring global attention to this auction and showcase why Brazil should move away from the corrupt fossil fuel industry.

Show your support in pictures or video

Sample Text to Share: On September 27th, in Rio de Janeiro, 287 blocks will be auctioned for oil and gas exploration. Stop investing in fossil fuels! The climate crisis is here, and we have no time to lose. We need 100% renewable energy sources, which are fair, free and accessible. And we need it NOW! #LeilãoFóssilNão #FossilFree #NãoFrackingBrasil Fernando Pino Solanas, Argentine filmmaker and senator says no to the fossil auction. Share your message of support. Here is an example from 350.org’s Executive Director May Boeve. 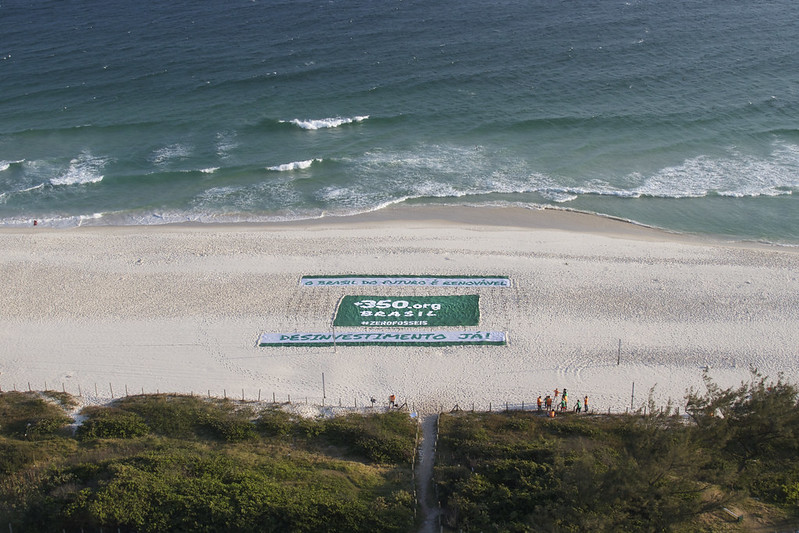