A blog by Gary Evans from Divest Aachen, part of the 350.org Fossil Free movement.
Photos, if not marked otherwise, by Gary Evans.

As protests against fossil fuel investments take off in Germany, I thought I’d explain how this all started and where it’s all headed.

What are we going to do with this? I’m sitting on a rolled up pile of red cloth in an old hospital complex in the centre of Paris. People are strewn everywhere. We’d spent the night partying after world leaders signed the Paris Accord to tackle climate change in December 2015.

I’d arrived with my big, black shepherd dog, Akiro, and two other activists a few days earlier. Paris was grey, cold and heaving with people from all over the world. All forms of protest had been banned by the government after the terrorist attacks only weeks previously. It felt strange to be suddenly in the middle of such a crowded city under a state of emergency, but luckily the hospital grounds that provided a place to pitch our tents offered us a safe haven to relax and meet other activists as we prepared for the Red Lines action at the end of the climate summit. At this point all demonstrations in France were banned.

On December 12 we headed out and into the Paris Metro. Akiro was wearing a bright red jacket and a muzzle to avoid trouble with the police. Unofficial demos were taking place across the city as we headed for the centre in hopefully inconspicuous groups (we were all wearing red clothes and looked like a mobile Christmas market). 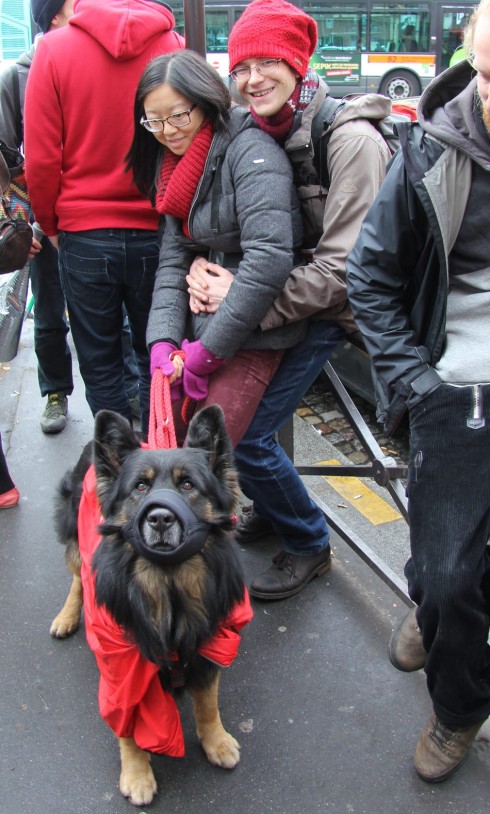 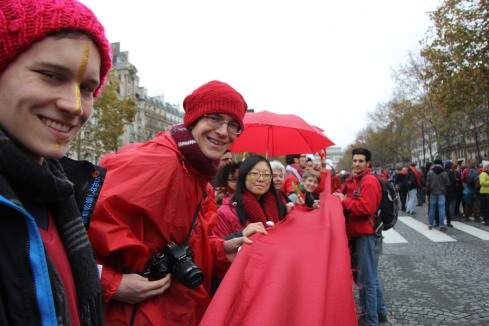 Our group: Divest Aachen at the start of the Paris demo. The red line is ready for action on the right. 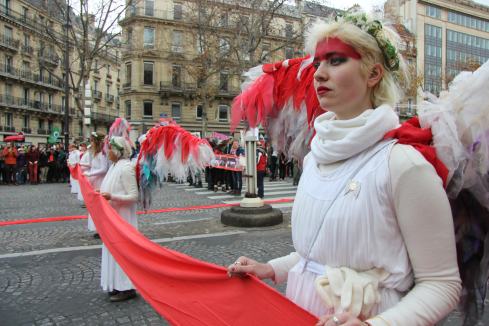 Angels at the Red Lines demo in Paris.

Just as we were about to arrive, we learned that the demo had been given permission at the last minute. Just how many people had decided not to attend the demo we will never know, but 40,000 people took part. Our 100 metre long red line was laid out on the road with many others in an emotional and peaceful event. Spontaneously we decided to march from the Arc de Triomphe to the Eiffel Tower where we held a sit-down protest on the bridge leading to the tower.

It was here we learned that the Paris Accord had been agreed upon, with an ambitious goal of holding global temperatures down to 2°C, with talk of achieving a 1.5°C limit. Many of us were sceptical, but we had at least achieved an agreement. The challenge was now to implement the changes needed.

The next day as we were leaving Paris I picked up the rolled up red line, which was wet, dirty and heavy. No one wanted it, nor knew what to do with it, so I took it back home to Aachen, Germany where it lay for a while.

Back from Paris. The important connection of international and local fights against the fossil fuel industry.

Having returned from Paris I was keen to see politicians agree on the closure of the lignite mines in our region. Of course nothing had changed on the ground. RWE were still busy tearing down an ancient forest to dig for more brown coal. We had to take action. When I mentioned the red line from Paris, no one really understood its significance, or potential symbolic value. I’d made the connection for myself, having followed events leading up to the demo in Paris. According to the Centre for Research on Globalization, “ecological red lines is a baseline level of ecological health that must be maintained.

The red line in Düsseldorf. Although Düsseldorf sold a big chunk of coal giant RWE shares years ago it still holds shares in the climate killing company.

I mentioned the red line again in a meeting where we were looking for ideas to put pressure on local politicians to divest from shares in RWE, the owners of the lignite mines. By this time we were working with Greenpeace and so we decided to furl out the red line in the form of the 1.5°C goal, which was agreed on in Paris.

Our demo was well covered in newspaper articles and on TV in the local and regional media. We were suddenly being taken more seriously by the authorities.

Since then the red line has been used in a demo to protect an ancient forest on the edge of a lignite mine. It’s been to Düsseldorf and Dortmund (video) and today it was unfurled and used in a large demo in Cologne. The red lines meme has also been used in  the UK, including being unfurled in coal mines in Wales.

Something as simple as a (long) piece of cloth has become a powerful symbol of the need to stop burning fossil fuels. We fervently hope that German politicians see sense and close down these mines because I for one am fed up with seeing red.

So where will the Red Line lead? Join the Divestment campaign in your area and become part of the movement for change.