Over the last 10 days the Global Divestment Mobilisation saw thousands of us all across the world take powerful action to help stop the climate crisis with more than 240 actions happening across the globe.

In East Asia more than 8 countries were able to join the GDM showing the broadness and diversity of the growing fossil-free movement in a critical region that hosts many energy projects that extract and burn fossil-fuels to the detriment of the communities and ecosystems that host those destructive facilities while at the same time also includes some of the biggest funders and consumers of fossil-fuel energy are also located in the region, further warming while harming the health and livelihood of communities.

This beautiful video captures what it was like. It shows the breadth, depth and beauty of our intersecting, international movement, how far we’ve come, and how far we can go together. Over 150 people attended 350.org Japan’s two-day “Earth Choice Festa” event for the Global Divestment Mobilization. Participants deepened their understanding of climate impacts and positive solutions through a series of creative exhibits — a photo exhibition on climate impacts on the island nation Tuvalu, various talk sessions connecting climate change and financial choices, as well as live art and music performances. 350.org Japan used the event to amplify the My Bank My Future campaign, which encourages people to choose fossil and nuclear free banks and push Japan’s major banks to implement sustainable investment policies. The  team collected signatures for the petition, which requests Japanese banks to disclose their holdings in fossil fuel and nuclear companies, implement investment policies that align with the Paris Agreement goal of keeping global warming under 1.5 – 2 degrees C, and freeze any new domestic and foreign investments in fossil fuel and nuclear related companies. Thus far 700 people have signed up to support the campaign. On May 5, 2017 young leaders and professionals, urban dwellers, renewable energy enthusiasts and other change makers gathered to hold a public talk share ideas and hopes for a more sustainable and cleaner energy future in Indonesia that is livestreamed online to reach wide audiences.

CHANGE/350 Vietnam held activities that educated the public and youths about the Global Divestment Mobilization 2017, and encourage them to collectively send their demands to banks investing in coal with street art and online communications. Art content was aligned with climate change and its impact to people.”No Coal” as main demand and narrative. It is the 1st time to interact around 500 citizens on the streets for 5 days in 2 weekends to delivered the petition of divest from fossil fuel. One of the citizen said “I am happy to see finally divestment conversation is starting, since recent he learned from movie about divestment but 350 Taiwan’s action reinforced the call to action.” To sum up around 150 petitions collected on site & online petition got escalated from 100 to 700. 350 HK with volunteers and supporters hold the banners at HKU and rest of 7 universities in HK, Divestment banner photos were showed and shared around HK universities and spread on social media for further outing.

10 simultaneous anti-coal community actions around the Philippine archipelago, most of them done within the vicinity of the coal-fired power plants. Chalk artists, activists and citizens delivered a message and raise awareness about the badness of fossil fuel, especially its investment, and make the citizens to participate in. Also pamphlets are distributed on the street about divestment. Combine with Low carbon campus project and Green Painting, Universities students gathered from different campuses to one place to join offline workshops to spread the message of climate impact to carbon money in daily lives. Youths talked about how possibilities can changed from their investment.

The Global Divestment Mobilisation in pictures 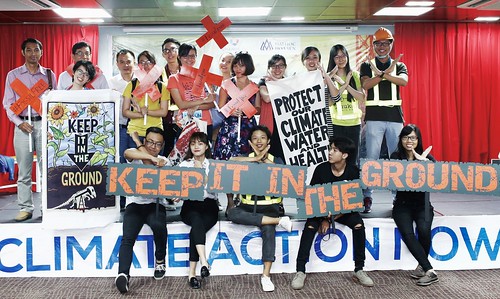 It’s over, but it’s a whole new beginning!

The Global Divestment Mobilisation not only connects the dots between investments and impacts, it reinforces the wisdom that is found in realising that all things are connected to everything else, and in a problem as huge as climate change —it does really mean that to change everything we would really need everyone.