You’re not alone in thinking that the fossil fuel divestment is morally, strategically and financially important. Below are just a few high profile voices speaking out in support of divestment so far:

“We need an apartheid-style boycott to save the planet[…] We must stop climate change. And we can, if we use the tactics that worked in South Africa against the worst carbon emitters. People of conscience need to break their ties with corporations financing the injustice of climate change. […] It makes no sense to invest in companies that undermine our future. To serve as custodians of creation is not an empty title; it requires that we act, and with all the urgency this dire situation demands.” Source: The Guardian

“I am proud to have been part of the group at 350.org that worked with students and other partners to develop the Fossil Free campaign.” Source: The Nation

“Fourth, divest fossil fuel assets. This is certainly the surest way to reduce carbon risk, though we fully recognize that divesting can be complicated and may be difficult for many asset owners. Such a transition could be phased in over several years, and there are gradations; early and easy progress can be made by at least divesting from the most emissions-intensive forms of energy—especially since they are likely to face stranding well ahead of less carbon-intensive fossil fuels.” Source: Washington Street Journal

“I’m glad that young people and colleges and others are seeing the need to bring home: We can no longer invest in companies that are part of the problem of the climate shocks that we’re suffering from. And so, I speak openly and encourage students and colleges to be part of that. It’s, to me, a little bit like the energy that was behind the anti-apartheid movement when I was a student. We were all involved because we saw the injustice of it. There’s an injustice in continuing to invest in fossil fuel companies that are part of the problem.” Source: Democracy Now

“Carbon divestment is a shining example…The active role of young people is worth noting. As with the anti-apartheid campaign in the 1980s, students today are taking action that can determine their
futures – and the futures of generations to come – for the better. They are showing the world that, once again, a transformation in how we grow our economies is essential. This is how inter-generational equity can be achieved: promoting a new investment model that responds to the risks posed by climate change. By avoiding investment in high-carbon assets that become obsolete, and by prioritising sustainable alternatives, we build capacity and resilience, particularly for more vulnerable people –
while lowering carbon emissions.” The Guardian “Push your own communities to adopt smarter practices. Invest. Divest. Remind folks there’s no contradiction between a sound environment and strong economic growth.”

““Well, science is science… there is no doubt that if we burned all the fossil fuel that’s in the ground right now, that the planet’s going to get too hot and the consequences could be dire.[…]We’re not going to be able to burn it all.” Source: Years of Living Dangerously

“Near the end of his speech, the president urged his audience to: “Invest. Divest. Remind folks there’s no contradiction between a sound environment and strong economic growth.” Normally, one would be tempted to dismiss this as the sound of someone waving away the need for hard choices. But, in this case, it was simple good sense: We really can invest in new energy sources, divest from old sources, and actually make the economy stronger. So let’s do it.” Source: New York Times 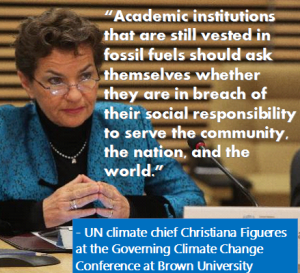 “The continued and dangerous rise in greenhouse gases in the atmosphere is in large part the direct result of past investments in energy and mobility systems based on the use of fossil fuels. New investments must now assist in reversing this unsustainable trend, and quickly if the world is to have a chance of staying under a 2C temperature rise.” Source: BBC News

“The thought that removing investment from coal on the part of one small institution is inconsequential and therefore not to be pursued, is analogous to the dangerous sentiment that in the context of a democratic system one vote is irrelevant because it does not constitute the majority.” Source: RTCC

“Academic institutions that are still vested in fossil fuels should ask themselves whether they are in breach of their social responsibility to serve the community, the nation, and the world.” Source: RTCC

and on faith institutions

“There are a myriad of ways in which churches and mosques to synagogues and temples can assist towards an ambitious climate agreement,” said Figueres, citing the fossil fuel divestment campaign as a way they could assist efforts to reach a climate deal. Source: The Guardian

Christiana Figueres said bankers would be “blatantly in breach of their fiduciary duty” if they failed to accelerate the greening of their portfolios:

“Investment decisions need to reflect the clear scientific evidence, and fiduciary responsibility needs to grasp the intergenerational reality: namely that unchecked climate change has the potential to impact and eventually devastate the lives, livelihoods and savings of many, now and well into the future,” she said. “I urge institutional investors to request companies they are invested in to disclose their carbon footprint and potential stranded assets such as those linked to the mining, exploration and burning of fossil fuels, and for members of pension funds to hold their trustees to account in this respect.” Source: RTCC

“Financial regulators need to lead, as well. Sooner rather than later, they must address the systemic risk associated with carbon-intensive activities in their economies, made clear, of course, by price signals. Start now by enforcing disclosure of climate risk and requiring companies and financial institutions to access their exposure to climate-related impacts.” Source: World Bank

“Do our financial regulators need to start thinking about protecting them [investments] and us from the ‘too big to fail syndrome’? The accountants, we heard, won’t address this issue as climate is not a balance sheet issue. So track the carbon exposure of your investment and don’t be misled by audited accounts which may be in the black when in reality your company or investment, five to 10 years down the line, may be sitting on ‘stranded assets.” Source: CarbonTracker

“This is one of the fastest-moving debates I think I’ve seen in my 30 years in markets.” – commenting on Blackrock and the FTSE Group launching a new set of fossil-free indices, which the Financial Times described as “a sign that a global campaign against fossil fuels is entering the financial mainstream” Source: Financial Times

“The outcome of the stigmatisation process, which the fossil fuel divestment campaign has now triggered, poses the most far-reaching threat to fossil fuel companies and the vast energy value chain. Any direct impacts pale in comparison.” Source: Smith School of Enterprise and the Environment, University of Oxford

“Countries with relatively high-cost reserves may never be able to extract them profitably as new factors continue to place downward pressure on demand and price. These include significant developments in renewables deployment, shale gas, efficiency, air pollution, water stress and social factors such as divestment, as well as climate policies,” he says. “All things being equal, fossil-fuel divestment will put higher-cost reserves at more risk of becoming stranded assets.” Source: Raconteur “The divestment campaign has real potential to bring in a new constituency of heretofore silent parties — investors — to exercise substantial pressure on the fossil fuel industry.” Source: Great Transition

“I think the Fossil Free campaign is one of the most exciting movements not just in Britain but around the world today. I love the fact that it’s really radical, that it’s about taking action and that young people are at the forefront of demanding much greater accountability from all of the institutions that they’re involved in[…] Movements like the divestment movement here, for example, all have a really important role to play in creating momentum to put real pressure on politicians to make changes” Source: Warwick Globalist

Have you spotted other high profile endorsements of fossil fuel divestment. Let us know and we’ll add them.