Send a message to your MP

It’s simple — if we want a safe climate, coal, oil & gas need to stay in the ground.

The world’s most authoritative voice on climate science, the Intergovernmental Panel on Climate Change (IPCC), released a report on October 8th on what it means to limit global climate change to 1.5°C – the target Canada not only endorsed, but fought for at the 2015 Paris climate summit. The bottomline: any hope for a safe climate hinges on ceasing fossil fuel expansion, immediately. Learn more…

After this report was released, thousands of people called on all federal party leaders to hold an emergency debate in the House of Commons on Canada’s plan to limit climate change to 1.5°C.  It worked! But one thing was abundantly clear by the time the 6 hour debate ended: talking about climate change isn’t enough, we need action.

That’s why hundreds of people from Halifax to Yellowknife to Nanaimo took action to deliver the IPCC’s report to more than half of all MP offices across the country along with a demand to line up Canada’s climate policies with science. Now, in the lead up to the 2019 election let’s keep the pressure up!

Scroll over the frame below to see all the photos. 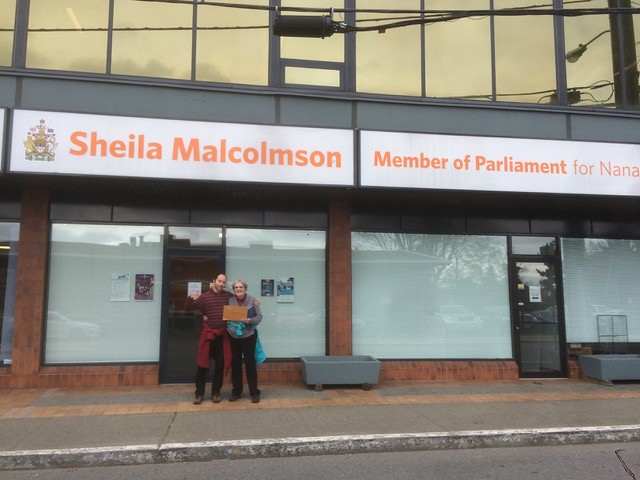 What does the report say?

With a planet barely 0.9°C warmer than pre-industrial times, we are witnessing a chain of catastrophic climate-related extremes all over the globe. If we want to avoid even more dramatic impacts, we have to stay under a 1.5°C increase in global mean temperatures — and our probability of success slims with every passing day.

The good news? We can do it.

It’s going to require systemic change at a pace never seen before, but it is technically feasible, economically sound and it’s not only the right thing to do, it’s the only choice we have.

To save our planet’s ability to sustain life as we know it, we need to drastically reduce the use of fossil fuels right now and rapidly move to energy systems completely powered by renewable energy. It will be a true energy revolution, but this time around we need to make sure that it is a just and equitable transition to a 100% renewable energy economy that works for everyone. Canada’s fossil fuel industry is big enough — it’s time to put an end to tar sands expansion immediately.

What’s does this mean for Canada?

In Canada, the translation is simple: any expansion of the fossil fuel industry — whether it’s via increasing tar sands extraction in Alberta, fracking LNG in BC, or offshore oil drilling in Nova Scotia — is fundamentally in conflict with securing a safe climate. Equally pressing, as the country’s highest courts have confirmed, Canada’s pursuit of mass fossil fuel expansion is undermining the Trudeau government’s commitments to Indigenous rights and reconciliation.

Indigenous peoples and vulnerable communities in the Global South will disproportionately bear the brunt of the climate crisis. Many of these communities are also part of a big, bold and creative climate movement that is our only hope for solving the climate crisis. Grounded in justice and informed by science, people power must step up to this moment and move the limits of what is possible.

Ordinary people from all walks of life are already leading the climate movement across the world. The People’s Dossier on 1.5°C contains stories from all over the world of of climate change impacts and communities fighting against fossil fuel projects and for a fast and just transition to 100% renewable energy.